For anyone in Canada who is remotely interested in both firearms and politics, the actions of the Royal Canadian Mounted Police have not been stellar, and their image of fair, and honourable representatives of Canada’s national law enforcement has been drawn and quartered.

One needs only look at recent firearm seizures during the 2013 High River crisis to know that legal firearms owners were targeted specifically by the RCMP upper echelons. Seizing firearms in the name of public safety, by breaking down the locked doors of homes of the victims of this natural disaster. Tracks of mud from the front door, straight to closets, all under the guise of looking for survivors.  Videos with audio which mentions firearms at the location, no rescue equipment present in the boats going to addresses. Gun owners are targets, and unfortunately it appears that the RCMP has declared open season on us all. 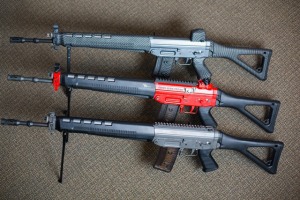 The Swiss PE90, called the Rolex of rifles

So for those who are not caring about politics in general, well have a timeline and breakdown for you regarding the Two primary re-classifications which impact legal firearms owners across Canada.

So what we currently have is the following situation.

This is wholly unacceptable. Now some of TPF’s readers may be wondering what they can do. It is very simple and can be done in many ways.

What to say or ask for is simple? Always use a multiple-step approach. Address the issue, praise the efforts, note that more must be done. Do not threaten. When you threaten something you force people to react defensively. Now people may say they need to force politicians to react defensively, but the secret is continuous pressure which guides the opinion/attitude of politicians. Demanding government action or issuing ultimatums without being civil has two major flaws. It usually comes over as being equivalent to a child having a temper tantrum, and secondly, if you don’t have the ability to significantly follow through with your ultimatum, it is worthless.

Now the authors of TPF do look at Facebook pages and web-forums and sees that many firearms owners are irate at the situation and are demanding the repeal of C-17/C-68. They proudly display “No Compromise” and state that anyone who is not suggesting the same level of commitment is compromising or acting like a sheep. This author has a question to those who continually spout “No Compromise” in this endeavour. We know that the collective efforts of firearms enthusiasts are impacting the current government to do something beneficial for firearms owners. So lets say they actually change only some portions of the act.

We’ll use Rob Anders’ petition as a basis and say they remove classifications & mag capacities, decriminalize (removing S91 & S92 from the CC), eliminate CFO’s (S 58.1), and remove safe storage and transport sections as well. However licensing will still exist….

It that a win? According to the basic statement of “No Compromise”, it is not. So will those people who spout “No Compromise” right now, later  say it was due to their efforts that changes were completed, despite not repealing the entirety of C-17/C-68? Time will tell.

Until we find out the outcome, which could be weeks or even months down the road; Tactical, Practical, and Fantastical urges you to continue to write/call/meet your MP’s and do so on an ongoing basis (reasonable, not daily) and continue to press for change which benefits the firearms owners of Canada.