Not irons, optics, red-dot, nor holosight; just what is the See All Open Sight?

If you want to shoot at a target with repeatable accuracy you need some form of sighting system. Thankfully every type of firearm has a sighting system already installed on them or comes with the ability to mount them in some fashion. Even most short barreled handguns use a have a form of sighting system on them. So then the question for some is what type of sighting device do they want to use on a specific firearm. Is it to be used for self defense, plinking, hunting legged or flying game, competition? What range or ranges will targets be engaged at? How much? How heavy? How well does it work? That’s a lot of options and unfortunately unlike the storyline of The Lord of the Rings, there is no one single sighting device that rules them all.

So first TPF will break down the basic types of sights for firearms:
Iron Sights:

Iron sights are simple sights. That means that they are mechanically a simple in design. A notched rear blade sight with a post-style front sight are the most common iron sights used on firearms with rifled barrels. Aperture, or “peep” sights use a ring instead of an open notch. In general, iron sights are very simple and cost effective while being lightweight.

These optical sights use lenses encased in tubular mounts, in order to place an superimposed reticle on the target. The aiming pattern appears to be at the same focal point as the target which allows for a single required focus. The construction of these sights is far more complex than iron sights, but allows for magnification effects which make the target appear closer. This obviously allows for longer target engagement ranges and greater accuracy.

Reflector sights are a version of optical sights that are more commonly known as reflex sights. The most common versions currently in use are red-dot scopes which use a light emitting diode (LED) to project a single dot image on a mirror surface of the objective lenses that reflects the reticle image back towards the user. A closed style reflex sight is mounted in a tube akin to a telescopic sight and can use filters and shades to prevent glare and such. The open style reflex sight is simply the objective lens mounted in a simple encompassing ring and are lightweight compared to tube versions. These LED powered sights can operate for extended durations due to the minimal power requirements.

The most advanced optical sight commonly available are holographic sights. Holographic sights use a laser to project an aiming reticle onto the surface of an objective lens which is then observed by the shooter’s eye. While they are similarly to open style reflex sights as they have a single objective lens mounted, there are more electronics contained inside. Usually have a slightly a finer aiming reticle than reflex sights.

Unfortunately we are all growing older. In the case of the author of today’s TPF installment, wearing corrective lenses has been the norm for over twenty years. The usage of fibre-optic enhanced or tritium embedded iron sights has allowed for faster target acquisition and better sight alignment, but sometimes an upgrade in sighting systems is desired. For many that means magnification optics for greater target resolution at range, or electronic sights that have a red-dot or holographic aiming reticles. So now enter the See All Open Sight, to be referred to as SAOS subsequently. 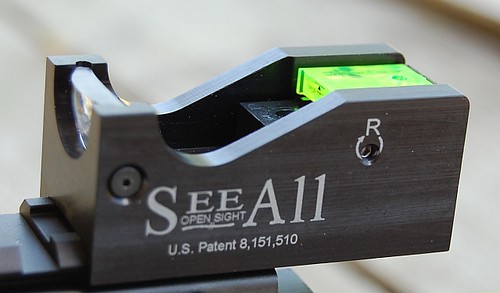 A new style of target acquisition systems. The See All Open Sight is designed as a rugged, fast, simple and in-expensive alternative

The SAOS is an attempt to create a lightweight, cost effective, accurate sighting device which is accurate at short and longer ranges. Built into a compact package the SAOS masses in at just a hair over 55 grams (1.8 oz) which is a fraction of most optical and electronic sight masses. Measuring 57.5mm long, 25.7mm wide and 25.4mm height (2.26″ x 1.01″ x 1.00″), the SAOS has an incorporated weaver/picatinny mounting profile. Unlike many such mounts however, the SAOS needs to be slide overtop of the rail into it’s desired position. Instead of the common bolt clamping though a groove of the rail, the SAOS uses a pair of set screws to secure its position via tension. This means that the SAOS can be mounted regardless of number and positioning of slots in the rail. 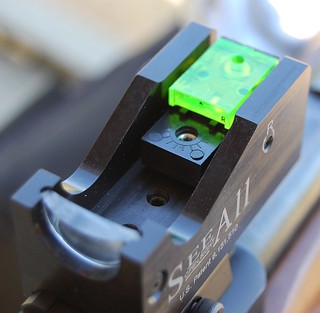 The sighting mechanisms and components which are situated inside the black anodized aluminum body are as follows:

The fixed optical lens is plano-convex in shape and by looking through it, magnifies the reticle image on the polymer block. The reticle itself consists of a horizontal line with a triangle, which is less than 1.0 mm (0.04″) wide. These are scaled up depending on the user’s eye proximity to the lens itself. The contrast of the triangular reticle and the green polymer block was very easy to distinguish and very easy and fast to acquire. The design in itself lends itself to the claim of being parallax-free in that you do not need perfect eye/sight alignment. 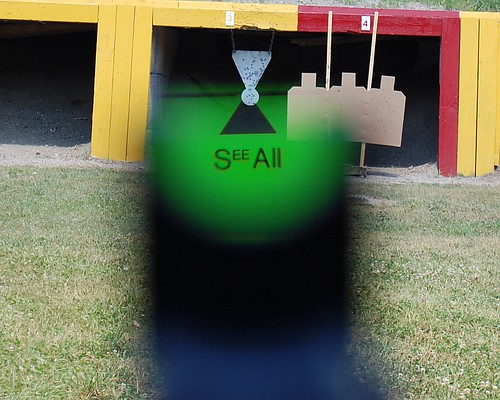 Even in the shade, the contrast allows for very easy target acquisition. Line up the tip of the triangle…

Usage of the SAOS is akin to using a holographic sight, but with the size of an open reflex sight and the contrast of fiber-optic enhanced iron sights. Various other individuals have mounted and tested the SAOS through a variety of firearms including hard recoiling Mosin-Nagants, AR platforms, shotguns, in addition to centre-fire handguns as well as the plethora of rim-fire firearms out there. TPF, used a tried and true Ruger 10-22 to be the basis of this evaluation. The SAOS was mounted on a dovetail to picatinny adapter and torqued down by hand. Initial shot impacts centered roughly 50 mm (2.0″) up and to the left at 23 m (25y). Very acceptable starting accuracy out of the box. This could be attributed to the length of the mounting rail which runs the whole length of the sight in aiding initial sighting alignment. Approximately 250 rounds later, the SAOS was still holding it’s point of impact, and underlined its ease of use and the bright, easy method of acquiring your target and also establishing your sight picture. 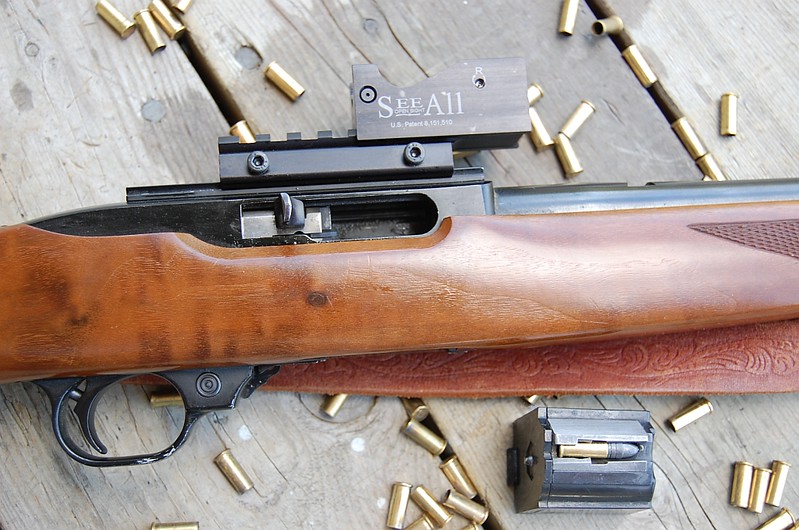 Mounted on an old favourite, the See All Open Sight is very simple and easy to use.

Are there smaller reflex sights out there? Yes. If the user is willing to spend several hundred dollars for an electronic sight. Which brings up another feature that may get overlooked; the SAOS doesn’t use any electronics at all. It’s rugged aluminum body has large protective sides and protects the sight from most handling abuse. The light gathering block allows for lower light conditions. The result? A very capable, short range, sighting system.  It is an excellent accessory for use by those who want a simple, high contrast, fast targeting sight, and the ease of use  makes this an especially valuable accessory for firearms used to introduce children and other people new to shooting.

The positives are pretty substantial for the SAOS:

The SAOS does have a couple things which may be a detractor for some who read this.

The See All Open Sight, as manufactured by Oversight Shooting Technologies has an MSRP of $98.99USD and Canadians can purchase this sight directly from their website SeeAllOpenSight. As is commonplace here at TPF, it is up to you, the reader, to determine if the SAOS is Tactical, Practical, or Fantastical!

Author’s note: The newer generations of the See All Open Sight have since removed the “See All” logo from beneath the triangle reticle to minimize any distractions while trying to acquire target alignment.