The CSSA has Officially Moved!

OK… The Canadian Shooting Sports Association actually moved it’s main office from Etobicoke to Oshawa on December 1st, 2017. Some may be asking why the office changed locations, and the reality is summed up by one simple answer. Cost of Operations.

Cost of operations is a no brainer. It costs significantly less to rent space and pay for utilities than in the previous location. We are not talking a couple percent, TPF was told it is in the order of 10% cheaper. The move into the new “digs” actually has the office presenting internally a much more professional atmosphere and can accommodate future growth of staff. The hardest part about the new office location? Finding the entrance…

While the actual address is on Wentworth Street West, the closest entrance to the second floor office is on the Boundary Road side of the building.

The author can almost hear you going “Huh? Why are you even mentioning this months after it moved?” To which we are glad you asked. On Saturday, February 4th, 2017 was the date when the CSSA’s Open House actually occurred to commemorate the change. The open house lasted from noon until 4:00pm in the afternoon and while not quite at the levels of the 2017 SHOT Show Reception, still garnered an estimated 90-100 individuals whom came by to wish the organization well and socialize with several CSSA personnel. Such as:
CSSA President, Mr. Steve Torino
CSSA Executive Director – Mr. Tony Bernardo
CSSA Legal Council – Mr. Edward Burlew
CSSA Office Staff, as well as several Board Members and Regional Directors

Plus a multitude of others I have missed. Which when you consider that the attendance at its peak was around 50-60 people in the office at one time is understandable. The gathering was chaotic, warm, and loads of fun! The event was amazingly well attended overall and was a very positive reinforcement that the CSSA has the support of many in the firearms community as well as the firearms industry. Kudos to the Canadian Shooting Sports Association for their past and current efforts and may there be success and even more positive initiatives that firearms owners can look forwards to in the future.

If you were at the open house and TPF missed listing you or you know someone who was missed, please feel free to send us an email on the contact page and we will add you and your website link.

P.S: I have heard that the CSSA’s AGM will be held on the weekend of April 22nd in Saskatoon, Regina. Hopefully we will see you there!

One of the highlights of SHOT Show for TPF-Online is the event hosted by the Canadian Shooting Sports Association (CSSA) and the Canadian Sporting Arms and Ammunition Association (CSAAA). Now for those of you who do not know of either organization, TPF will sum it up very simply.

The CSSA is the Canadian equivalent of the National Rifle Association (NRA) of the United States. Fighting for legal firearms ownership and usage for responsible Canadians. Represents the firearms owners of Canada.

The CSAAA is the Canadian equivalent of the National Shooting Sports Foundation (NSSF) of the United States. Fighting for legal production, distribution, and retail of firearms to the Canadian firearms community. Represents the firearms industry of Canada.

As always, the definitions are subjective as some may not agree with the workings and machinations of either, just like their US counterparts. TPF has been present in some sort of gathering for nearly every SHOT Show for the past eleven years of attending, and it wasn’t until a short few years ago that this event really began to flourish.

Emails were sent out roughly in late August/ early September of 2016 which included an invitation that stated:

The Canadian Shooting Sports Association (CSSA) and the Canadian Sporting Arms and Ammunition Association (CSAAA) are pleased to present the fourth annual Canadian Industry Reception at the 2017 SHOT Show from 6-10 p.m. on Wednesday, January 18, 2017 at Treasure Island Las Vegas.
As a member of the Canadian shooting sports industry, you are invited to participate in this special networking event by sponsoring, attending and inviting your industry guests. The event is designed to showcase the Canadian industry and to provide a social networking opportunity to our industry members.

The origins of this event have evolved from a small social gathering of individuals at timeshares and restaurants into it’s current iteration.

This event has become a great success from when it unofficially started five years ago when the CSSA’s informal Meet & Greet became a sponsored event with a $300 USD budget thanks to a couple select individuals. This gathering, which was to be last of the CSSA’s official Meet & Greets, had an end result of four Texas Mickeys, several cases of pop and water, plus eight extra large pizzas and just shy of twenty (20) representatives of the Canadian firearms industry in a single hotel room for an entire evening. From its humble origins back then in 2013, that marked the first formally organized event specifically for a Canadian attendees of the SHOT Show; this event continues to grow and flourish.  This was proven with the 200+ attendees whom signed in at the event entrance, with all but a handful of those hailing from Canada. From a score of individuals to over ten times that in a few years, this event really has become a focal point of Canadian attendees at SHOT Show to interact with their Canadian business partners, associates, colleagues and friends that would otherwise only ever talk via the phone, email, and video-conferences. It becomes an event that these people could network, gain contacts, and just socialize and unwind from the stressful schedule of SHOT.

As the event has grown, so has the requirement for sponsors of the event. It is with many thanks that TPF lists the following sponsors and links to their respective sites, so please feel free to click the links, buy their products or products offered by them and help our industry become even better…

Many thanks must be given to ALL attendees of the CSSA/CSAAA event with many new faces, it was a very good and positive event, and you can bet that there will be another for next year! If you have any questions or comments regarding the event and/or attending please email Mike Duynhoven of the CSSA, he wants feedback and to add Canadian Industry for next year’s event. If you do decide to purchase products from or through one of the event supporters, please reference TPF-Online if you care to help us out. Make sure that all of you enjoy the rest of 2017 and until the next installment, stay safe and have fun!

Some images of the 4th Annual Canadian SHOT Show Reception:

The entrance to the 4th Annual Canadian SHOT Show Reception

A selection of snacks provided thanks to the generous sponsors of the event. Before the doors open

A few moments before the doors officially open

Getting into full swing, the event starts filling up

A different angle from the room in the early evening 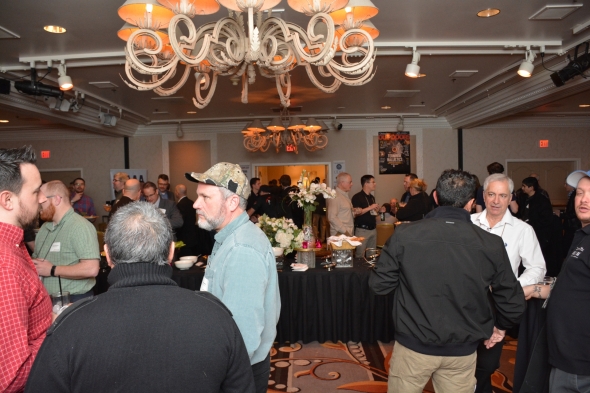 Mid-Event, the attendance turnover is steady. As people arrive, others leave for other events and commitments 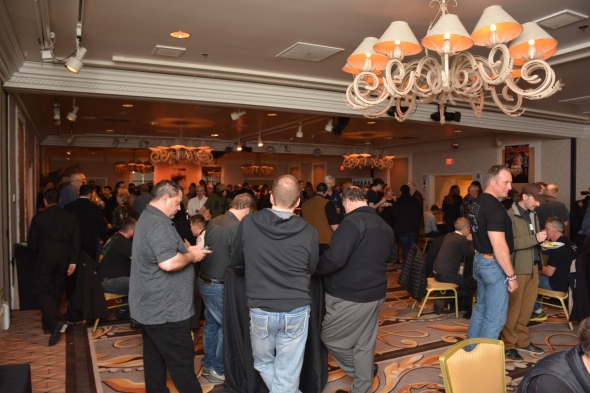 All aspects of the Canadian firearms industry are represented here 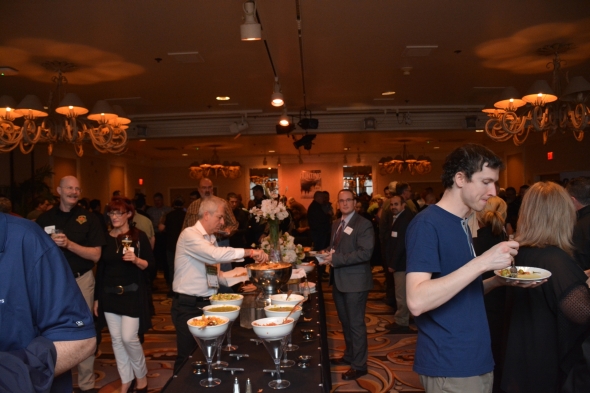 Oh oh. We finally got caught taking images! Many thanks to the CSSA and CSAAA for the opportunity

Several scores of per-registered attendees, plus the reams of invited guests meant that over 220 people attended the 4th Annual Canadian SHOT Show Reception

Once again many thanks to the Canadian Shooting Sports Association and the Canadian Small Arms and Ammunition Association for hosting this event! To give readers and idea of who was there, TPF was able to compile a partial list of Canadian industry registered attendees: (In no particular order, and definitely not complete)…