Racking your .22 pistol – Making it effortless…

As a person whom has introduced scores of individuals to shooting, the author’s favourite handgun is his workhorse Ruger Mk II. Crude, reliable and other than the incredibly annoying disassembly lever, this handgun has delivered over 100kg (220lbs) of lead downrange by this author’s hands alone. With over 45,000 rounds through it, it has been cleaned, repaired, rebuilt a few times but is a great tool in an instructors arsenal to bring the shooting experience to those whom otherwise have never shot a firearm. There are many different models and makes of handguns that are just as reliable and long  lived as the aforementioned Ruger, it just happens to be the firearm most used by the author for introducing shooting virgins to our passion.

Now over the decades, hundreds of people have shot this handgun whose ages range from attendees of junior high-school, to great grand parents of those kids. In general they are able to manipulate the firearm very well with proper coaching and instruction, however in some cases, they are physically unable or have difficulty performing certain operations on the handgun. The number one issue? Racking the slide back to chamber/clear a round into/from the chamber. Now some of you are doing a double take and thinking how can you not be able to rack a .22 rimfire pistol! The author has seen dozens of people lack the finger/grip strength to pull the recessed bolt tabs and do just that. It usually occurs with younger children and those of very slight build, usually female, but not always. 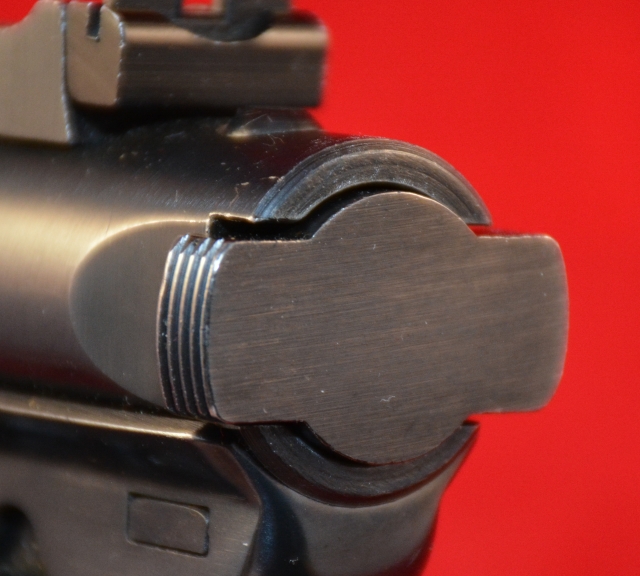 While many say, “But it is just a rimfire!?!” The bolt design requires some finger strength to initially charge

This past SHOT Show, the author came across a company called Tandemkross. Founded in 2012 by a pair of software developers. Yes. Software developers. Bryan Haaker and co-worker Jake Wyman went out to try Wyman’s brand new Ruger Mk III 22/45 to unwind from their software programming work. Functional issues and subsequent difficulties in acquiring performance part upgrades for this handgun ensued. The resultant firearm performance improvements once these upgrades were installed started the duo on the path of manufacturing these upgrades and making them far more common, affordable and available. Tandemkross manufactures accessories and markets other aftermarket products that span nearly all areas of a rimfire pistols. This includes but is not limited to the following: 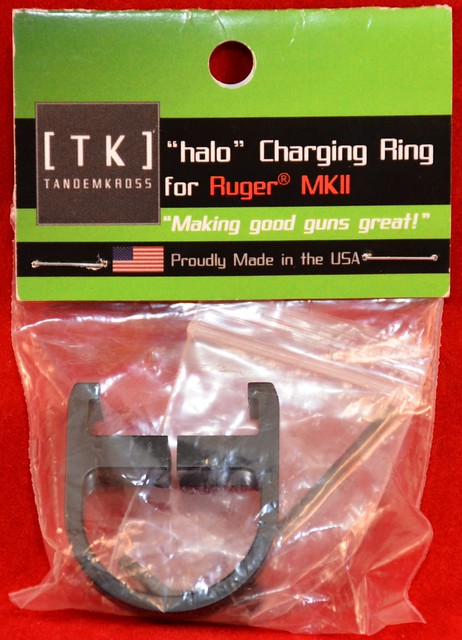 Coming back around to the occasional inability of some to pull the charging handle back, TPF-Online was able to aquire one of Tandemkross’ “Halo” charging rings, specifically for the Ruger Mk II. These handles are currently available for the various Ruger MK II’s, Mk III’s, and Mk IV’s; as well as the S&W SW22 Victory and the Browning Buckmark. The “Halo” is quite simply a ring machined from aluminum which clamps onto the specific serrations that are used for chambering/clearing rounds. The contoured inner fingers are machined for the specific model of firearm. In the case of the Ruger Mk II, the fingers have a dished internal seat that corresponds perfectly with the bolt’s racking tabs. The Halo ring is secured into place with a recessed #5-40 socket head cap screw that draws the fingers of the Halo together through tension and creates a solid lockup with the Mk II’s bolt ears. On the inside flap of the product package for the Halo, Tandemkross states the following:

This product is protected by the TANDEMKROSS lifetime guarantee. If the product at any time does not perform as advertised, TANDEMKROSS will provide a replacement part of equal or greater value. 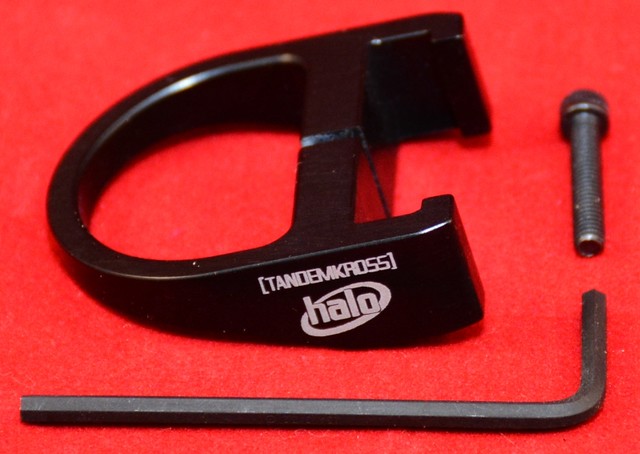 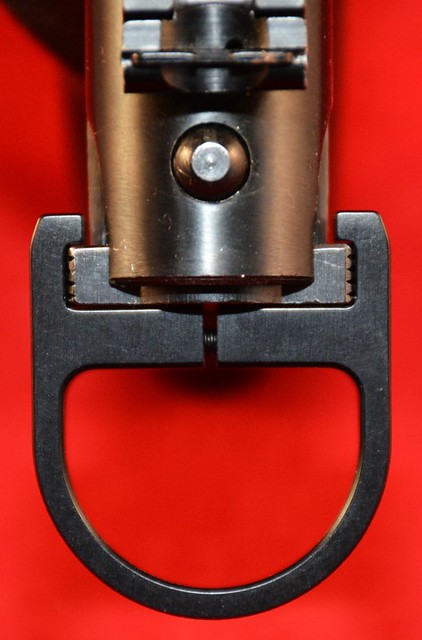 A small addition of Loctite to the screw threads is recommended for this model, and a warning to only torque the screw via the short end of the allen key. This makes it easier to not over tighten the tension screw. The material is only aluminum and a #5 thread is not what TPF-Online would call a robust bolt for reefing upon. If you can, try and keep the torque less than 0.6 Nm (5.3 lbf-in).

The Halo unit is meant as an aid for racking a handgun, and in the case of this review, the bolt of the Ruger Mark II. It is not a leverage multiplier, nor does it claim to reduce the required force to actuate the bolt/slide. It does allow for an enhanced ability to grip the bolt, even with gloves and in less than ideal conditions. However, the perceived decrease in required effort has more to do with the ability to use greater grip on the bolt to apply force through. Instead of using one’s fingertips to grip the raised bolt wings of the Mark II, being able to hook an entire finger through the Halo, means a much larger area to directly pull against. The perceived effect is that of an easier ability to charge the handgun.

The gloss black anodized aluminum Halo, adds a definite increase in length to any attached firearm.  The visual appearance of the attached unit is very sleek and, in the author’s opinion, compliments the profile and look of the handgun.  Obviously the Halo shown in this review’s images has next to no wear marks and as of this review has only a couple boxes of ammunition through it. The author promises to increase that to several bricks worth over the 2017 year.

The addition of the Halo to the author’s handgun was a very simple endeavour. The added mass was negligible and did not affect bolt performance, nor cycle times to any level that could be detected through usage. As the focus is through the sights of the firearm, the reciprocating Halo ring did not distract from the user’s sight picture. What was very apparent was that during the brief evaluation, the ring allowed the author to perform jam clearing at a much faster speed than with the “Halo-Free” configuration. 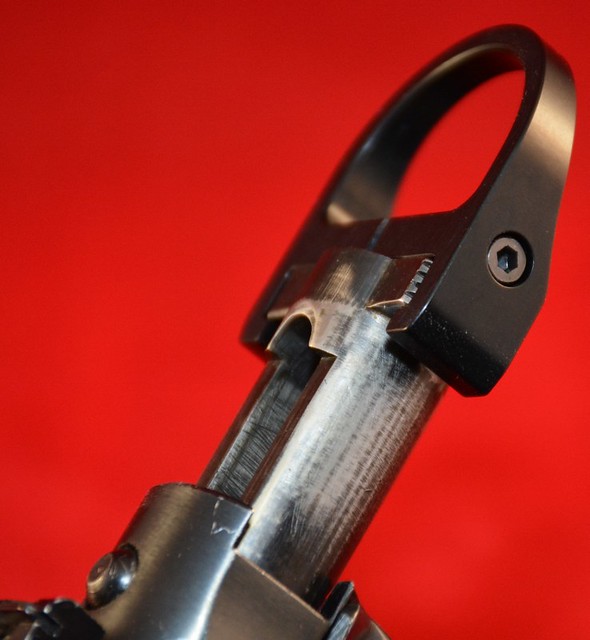 The Tandemkross Halo is available for a selection of popular .22LR handguns, but the reviewed component was specifically for the Ruger Mk II. The model number is TK01N0167BLK1 and has an MSRP of $44.99 USD. Brick and mortar stores such as Select Shooting Supplies, in Cambridge, ON, stock Tandemkross products and can order them if you require a specific model. The Halo is a light weight accessory that is designed to improve the ease of manipulating one’s .22LR handgun, but which category does it fall into for you? Tactical, Practical, or Fantastical? Leave a comment and let us know!

Screwdriver not handy as a pry-bar? Don’t use your knife… Unless..

One of the most abused parts of a knife is the point or tip of the knife. Users jab it into seams and use the blade as a makeshift wedge or pry-bar in order to crack open or split whatever they are working on at the time. The problem is that the tip of the knife is the weakest part.

The prying puts large tangential stress into a small focused area on what is traditionally the thinner parts of a knife. Now, several knives try and offset this by making a blunt tip which increases the area used for prying that distributes the fores better. Others increase the blade thickness to have a stronger tip that can suffer greater levels of stress before breaking. Columbia River Knife and Tool had a slightly different take which makes a bit more sense to the author. Enter the Barge.

Kershaw’s Barge is a very simple and rugged designed knife that has basically two purposes. Cutting stuff and being used as a wedge/prying tool. The knife is not really that small, amassing just over 150g (5.4oz) and measuring 119mm (4.75″) in length when closed. The first thing you notice looking at the knife however, is the huge metal cap on the knife’s butt end. That is the key of the Barge, the wedge shaped  butt cap, and it is massive and mounted very securely between the liners. The wedge acts as the spacer between the two liner halves of the knife. It is secured by five (5) screws along the back and rear edges of the handles, these are not small screws either, they are massive compared to those typically used on folding knives. Of interesting note of this design is the fact that the majority of the screws/nuts use a T8 torx driver for assembly/disassembly, with two exceptions. The reversible pocket clip allows for both left and right handed, tip-up carry, and is secured by a pair of T6 torx pan head screws. The second exception is the most obvious and greatest departure from the other fasteners used, as the large pair of slotted screws provide the main strength that binds the handle to the wedge. The wedge also has a lanyard opening for those who desire to use them.

As is typical in many frame lock knives that are manual in opening, there is a small bearing that is press fit into the locking arm and a corresponding dimple/hole in the blade that enable securing the blade into a closed position. This does equate to a very slight increase of required pressure when opening these knives, but it is almost negligible when using the thumbstuds to open the 6.6cm (2.6″) edge. Now speaking about edges, the Barge’s plain blade has a slight hollow gound edge whose profile is a combination of a warncliffe edge with the spine of a typical drop point and incorporates a slight upward curve close to the tip. Manufactured from 8Cr13MoV, the blade is easily sharpened, and the blade itself, the frame halves, and the wedge have been given a stonewash finish which gives a soft, metallic appearance.

With dual serrated areas along the spine, a multiple of grips can be utilized for a variety of tasks

The overall length of the wedge insert is 66mm (2.6″) and is scalloped to allow for the knife’s blade to easily fold up while creating a very robust assembly. The steel right frame panel is 2.4mm (0.095″) thick and incorporates the frame lock mechanism, whereas the the left panel is slightly thinner at 2.0mm (0.08″). However a black textured nylon panel completes the left side for added grip. The blade is 3.1mm (1/8″) thick and uses nylon washers for stiffness and rigidity at the pivot point. The Barge measures 12.1cm (4.74″) long when closed and 18.4cm (7.24″) when locked open which belies the 146.8grams (5.18oz) that this hefty tool masses. The wedge of course is a large contributing factor in those numbers, and with a 1.7mm (0.67″) thick flat edge that is 10.0mm (0.40″) long, the “screwdriver” tip of the Barge is ready for some of the worse pry jobs most people can imagine.

The Kershaw Barge, model 1945, is a very utility oriented knife that could be a good addition to an individual’s every day carry inventory. With a noticeable mass and good control surfaces, this offering may seem cheap at the MSRP of $48.99 CDN, and can be found in stores such as House of Knives. As always however, the question is what category the Barge falls into for you, the reader? Tactial? Practical? Or Fantastical?

Is it a good choice for just shy of $50 CDN? You need to be the judge…