Another late story from TPF Online and a continuation from a previous entry!

Bill C-42
An Act to amend the Firearms Act and the Criminal Code and to make a related amendment and a consequential amendment to other Acts
AKA: The Common Sense Firearms Licensing Act or CSFL Act 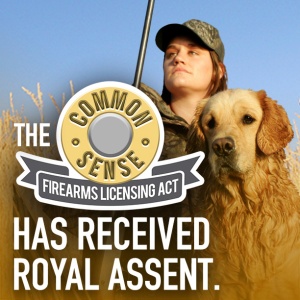 Slow to start, but a mad dash to the finish….

The First Reading of this bill was introduced back on the 7th of October, 2014. And the bill itself generated much controversy even among the firearms community and we at TPF gave our opinion on the Bill way back then in October 2014, soon after it’s first reading in the House of Commons. Second reading was originally supposed to be done on October 22nd, 2014. However that morning Parliament hill was assaulted by a gunman armed with a hunting rifle and Bill C-42 sat in hiatus. That is until April 20th 2015, nearly 6 months after the first reading. What followed was a political whirlwind in terms of speed with which this bill made it’s way through the legal system.

WOW. Two months from 2nd reading in the HoC until receiving Royal Assent. That is faster than the speed of light in Political terms… Some portions of the act were to be effective immediately and others were to be enacted in the several months after the bill was passed.

The first point of these is one of the most contentious as it is a technical increase in “gun control” legislation by removing a method of which to enable individuals to acquire a firearms license. This is wholly true, but from a familiarity standpoint, it also means that every single new firearms applicant will be familiarized with a common knowledge set regarding firearm ownership and utilization. From a numbers game, 95+% of all new licensees took the full Canadian Firearms Safety Course , aka CFSC (and restricted version, CRFSC) versus those that challenged the test. The numbers of those who challenged the test has been continuously dwindling over the last decade.

The CFSC supposedly includes information regarding the following topics (The CRFSC is focused towards restricted firearms):

The second point is a good thing as it ensures that CFO’s cannot just make up stuff on the fly and force conditions on firearms owners regarding licensing and authorizations to transport.
Point three is a good thing in theory, but to be given a possible lifetime prohibition would hopefully be dependent on the severity of domestic abuse charges. No the author is not being soft on domestic abuse, but take this example; A yelling match regarding finances by a couple that is reported by neighbours and police arrive amid the yelling with no physical violence involved. Police Charge someone with domestic violence as yelling at another is a form of abuse/violence. In that scenario is a lifetime firearms prohibition warranted?

Allowing the government to reclassify firearms as non-restricted, and the fourth and final immediate provision enacted by C-42. Two words, Hot Damned! Since the introduction of C-68 back twenty years ago, the only direction available to government bodies was to be able to classify firearms to Restricted and/or Prohibited classification. This was used extensively back then to make sure that the scary black guns back then were not easily available to firearms owners. Twenty years later, the ability to classify to non-restricted is now an option. If only there was a couple firearms that they could start using this with….

Classified back from prohibited!

WHAT FOLLOWED! (as of July 31, 2015)
The next activity that occurred was the re-classification of the CZ858’s and Swiss Arms rifles from prohibited status to their original status. The FIRST time that any firearm has been reclassified to a “lesser” classification in over 20 years. The models that were targeted?

These fifteen rifle models had been re-designated as converted automatics back in Spring of 2014, and affected roughly 12,500 firearms owned by Canadians to a retail value of over $13,000,000. These rifles were previously classified as non-restricted and restricted due to their barrel length according to the standard classification system enshrined in law. These rifles, on July 31, were reclassified back to their former statuses, yet they are still technically converted automatics. Huh? A WTF!? may spring to our reader’s mind. The FRT, Firearms Reference Table, currently lists the above firearms as converted automatics whose classification is set as non-restricted or restricted by an Order in Council. They are now Prohibited devices that have been government granted non-prohibited status. Not quite the same as being fully reclassified, but it is a start, and since that also means they can be used fully and wholly akin to over 2 years prior, it is a very good start!

Bill C-42. It is here and being implemented in steps…

The next part to the evolution and implementation of Bill C-42 will soon follow!

P.S. Images stolen from the internet as the crew of TPF does not own either of these fine rifles. Thank you Firearms Blog!

TPF apologizes for the delay in posting this. We understand that this is nearly 2 months out of date, but wanted to keep the readers of TPF informed about what has been happening in Canada!

Another year has passed and the CSSA has weathered another year of RCMP shenanigans, political wrangling, and general herding of cats that is the firearms community. And they are doing it well.

The Canadian Shooting Sports Association’s Annual General Meeting and subsequent “Stick To Your Guns” dinner was held on May 30th, 2015 at the Ottawa Conference Centre. It started at 10:00am on Saturday, with several dozen attendees present for the association’s year in review. Notable individuals such as Daniel Fritter (Editor of Calibre Magazine), Chris Youngson (Owner of Canada Ammo), were present as the board outlined the past actions of the association as well as provided financials that showed the growth in membership and a healthy surplus. In fact according to the numbers, the CSSA is at its strongest levels ever both in memberships and in finances. Over 23,000 full members as of that morning. The addition of Mr. John Evers to the Board of Directors was another change that was well received. There were very few questions at the end of the AGM and people broke for lunch.

Of course being a grand CSSA event that was not the only draw that was present for CSSA members. The afternoon held a series of seminars for interested parties to attend. I was told that CSSA members were able to attend for free, and that non-members could attend for a $40 fee that enabled them to attend all three seminars.

TPF feels that the seminars were a great addition to the afternoon time slot. With nearly three dozen people attending each of the seminars, the allocated room was well filled with bodies. There should be many thanks towards these three individuals whom gave their personal time and attention to present at these seminars in order to continue educating the firearms community. It was great to finally meet Dr. Gary Mauser in the flesh, and to once again talk to Mr. Patrick O’Neill and Mr. Keith Beasley.

Obviously the highlight of the day was the Stick to Your Guns (STYG) dinner. This STYG dinner was a truly important one as it was there to honour the CSSA’s Minister of Firearms, the Honourable Garry Breitkreuz, Member of Parliament for Yorkton-Melville, Saskatchewan. Mr. Breitkreuz has stated that he will no longer seek re-election and will be leaving federal political life after serving his constituents for over two decades. You read that correctly, he started sitting as an MP since October 25th, 1993. That will be a week shy of twenty two (22) years of being present in the House of Commons come the October 19, 2015 fixed election date. The standing ovation lasted for several minutes….

Several minutes of standing ovation for Garry Breitkreuz, who is retiring after nearly 22 years of representing Yorkton-Melville

Roughly one hundred people attended the Ottawa STYG dinner and they included a slew of well known and respected individuals. Brian Lilley (The Rebel), the aforementioned Daniel Fritter, Chris Youngson, Dr. Gary Mauser, Keith Beasley, Brian Lovig (Daily Split), several MP’s and future possible MP’s, and several of the Office of Public Safety’s staffers. The main guest was Mr. Breitkreuz, which made a pre-recorded video by the Minister of Public Safety, the Honourable Mr. Stephen Blaney, who took the time to record a message for Garry Breitkreuz and of course plug C-42 a bit, one of the highlights of the event.

Many thanks should be given for the companies and individuals whom made all their various products available for the fund raising aspect of the STYG dinner.

But in the end it the entire STYG dinner was a dedication to a champion in Federal politics. Thank you for decades of service in fighting for firearms owners across Canada Mr. Breitkreuz. You will be sorely missed in Ottawa!

Thanking the champion for so many years of dedicated service to firearms owners.

OH. Did we mention the new duck gun that Mr. Breitkreuz got? He may have to wait until they come in ever so slightly closer….

ACTS & PROVE… Even retiring MP’s do it…

Thank you for reading this small, and very late installation of TPF. We will have more to come!