Battered from field use, the Ultimate is revisited…

After several trips to the bush, the Ultimate looks relatively unchanged on the outside

Roughly a year ago, TPF Online wrote an installment on a Gerber/Bear Grylls collaboration called the Ultimate Survival Knife. The knife itself caught the interest of one of the author’s more adventurous friends and he acquired it. What many reader may not realize is that in some cases, product images and information is created long before a review is written. After over a year of abuse in the back country of Ontario, Mr. Jody Hammel submitted this review of the knife.
GERBER/BEAR GRYLLS ULTIMATE  SURVIVAL KNIFE 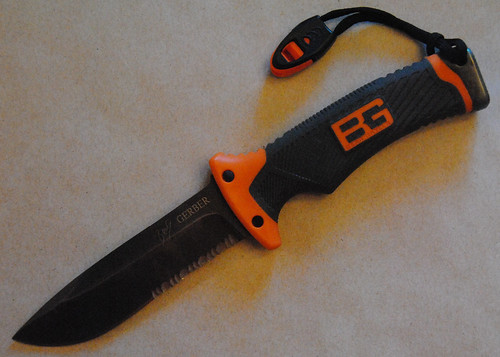 Hammer, splitting wedge, fire starter. About the only part not used was the whistle…

I had seen and acquired the Ultimate Survival Knife back in early September 2013, having had to wait for TPF to finish photos and gathering information on it, before handing it over to me. I have since been using this knife as my main camp knife when in the back woods of Algonquin Park which I frequent several times a year. In general the blade feels solid in construction. The blade itself is 3/8” thick at its base where it meets the handle. After 3″, it begins to taper to the tip point and has an overall blade length of just less than 5”. The rubberized handle has a nice grip that does not slip in your hand when it is wet. The index finger grove is nice for added stability. The pommel appears to be made to the same metal as the blade and is perfect for driving in tent stakes or cracking open stubborn walnuts. I have bashed a few things with this and it doesn’t show any wear and tear. I have yet to try the whistle on the lanyard. 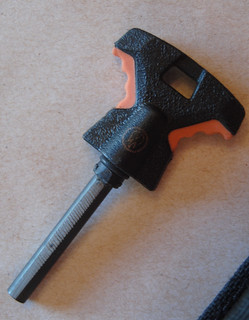 Used for several fires, the ferrocerium rod was wearing fast, but stayed secure in the sheath

The Ferrocerium fire starter rod that is built into the sheath came in handy one night as my lighter was hung 40 feet up a tree with the rest of the cooking gear. We had no issues using the rod and the back of the knife’s blade to get the fire started. While I was concerned that the striker rod may come lose and get lost, it never

I did use the blade for some bush whacking to clear trail to where our food and cooking gear was hung. The front of the blade was fine but the serrated section did not fare too well. This is no great loss to me as I was not a fan of the serrated part any way. 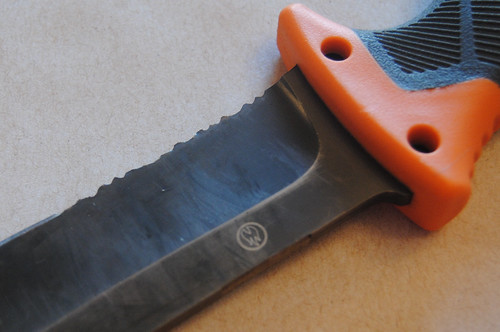 Abused as a mini-machete, the serrated edge suffered

Took a licking and continues to ask for more

My only complaint is not with the knife itself but with the sheath. I find that it sits too high on my belt and the squared off corners would either dig into my side or scrape against it. It would be nice if the entire knife and sheath hung a little lower to avoid this issue or if the sheath’s corners were rounded. The rest of the sheath is good and the knife sits snug and won’t easily fall out even with the Velcro clasp undone. The fire rod does hang upside down but again is a snug fit and I have never had it fall out by accident. On the back there is a knife sharpening flat that I have had no use for as the knife has kept its edge. The serration edge would require a specialized sharpener to re-edge the tips of the serrations, but not too worried about it.

Over all it is a good all around knife. I used it to whittle tent stakes out of branches with and then drive them into the ground. The blade is beefy enough than I can use it to split larger branches by hitting it with another log and have no fear of breaking the blade. I also like the orange colouring but that’s just personal.

I never needed the whistle or the SOS instructions attached to the knife and sheath, so cannot really comment on those features.

Pros
• Feels good in the hand (I have long fingers).
• Blade keeps an edge.
• Solid construction.
• Colouring helps locate if  dropped.
• Fits snug in the case.

Cons
• Sheath rides to high on the belt causing discomfort. 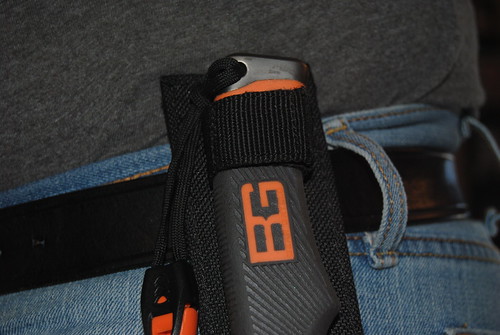 The only complaint is the sharp, hard square corners of the sheath

Many Thanks to Mr. Hammel for his time and efforts in getting back to TPF-Online and writing this review after many months of usage and abuse while adventuring in the regions of Algonquin Park.

This entry was posted on March 8, 2015 by M. Duynhoven. It was filed under Blades and tools, Outdoors, Submissions and was tagged with abuse, Bear Grylls, blade, fixed, Gerber, grylls, knife, review, TPF, TPF-Online, Ultimate.