The CSSA has Officially Moved!

OK… The Canadian Shooting Sports Association actually moved it’s main office from Etobicoke to Oshawa on December 1st, 2017. Some may be asking why the office changed locations, and the reality is summed up by one simple answer. Cost of Operations.

Cost of operations is a no brainer. It costs significantly less to rent space and pay for utilities than in the previous location. We are not talking a couple percent, TPF was told it is in the order of 10% cheaper. The move into the new “digs” actually has the office presenting internally a much more professional atmosphere and can accommodate future growth of staff. The hardest part about the new office location? Finding the entrance… 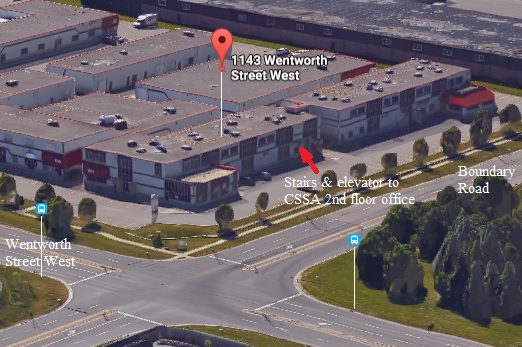 While the actual address is on Wentworth Street West, the closest entrance to the second floor office is on the Boundary Road side of the building.

The author can almost hear you going “Huh? Why are you even mentioning this months after it moved?” To which we are glad you asked. On Saturday, February 4th, 2017 was the date when the CSSA’s Open House actually occurred to commemorate the change. The open house lasted from noon until 4:00pm in the afternoon and while not quite at the levels of the 2017 SHOT Show Reception, still garnered an estimated 90-100 individuals whom came by to wish the organization well and socialize with several CSSA personnel. Such as:
CSSA President, Mr. Steve Torino
CSSA Executive Director – Mr. Tony Bernardo
CSSA Legal Council – Mr. Edward Burlew
CSSA Office Staff, as well as several Board Members and Regional Directors

Plus a multitude of others I have missed. Which when you consider that the attendance at its peak was around 50-60 people in the office at one time is understandable. The gathering was chaotic, warm, and loads of fun! The event was amazingly well attended overall and was a very positive reinforcement that the CSSA has the support of many in the firearms community as well as the firearms industry. Kudos to the Canadian Shooting Sports Association for their past and current efforts and may there be success and even more positive initiatives that firearms owners can look forwards to in the future.

If you were at the open house and TPF missed listing you or you know someone who was missed, please feel free to send us an email on the contact page and we will add you and your website link.

P.S: I have heard that the CSSA’s AGM will be held on the weekend of April 22nd in Saskatoon, Regina. Hopefully we will see you there!

This entry was posted on February 6, 2017 by M. Duynhoven. It was filed under CSSA, Politics, Ranting & Raving and was tagged with 2017, canadian, CSSA, firearms, Open House, Oshawa, reception, Shooting, TPF, TPF-Online.